Getting Ready To Build Our Dream Home

My wife has been irritated with living in what she calls "the fishbowl"--which is to say, we live on a 1/4 acre parcel near my job. She was hoping to get into a more rural setting when we came here, but at the time we moved to Boise, houses weren't selling in Sonoma County, so we had to buy relatively cheap. (I don't dare tell you what I mean by "cheap": the Californians will say, "Was that a down payment?" and most of the rest of the country will say, "That's not cheap!")

Anyway, we are in the process of buying a multiacre parcel with spectacular views. I've learned a lot about site-built vs. manufactured vs. modular housing the last few days--and I think we are going to be having a modular home built in a bit over a year, once our son is close to graduating. (We certainly aren't going to change his school this close to graduation.)

Here's one of the views. 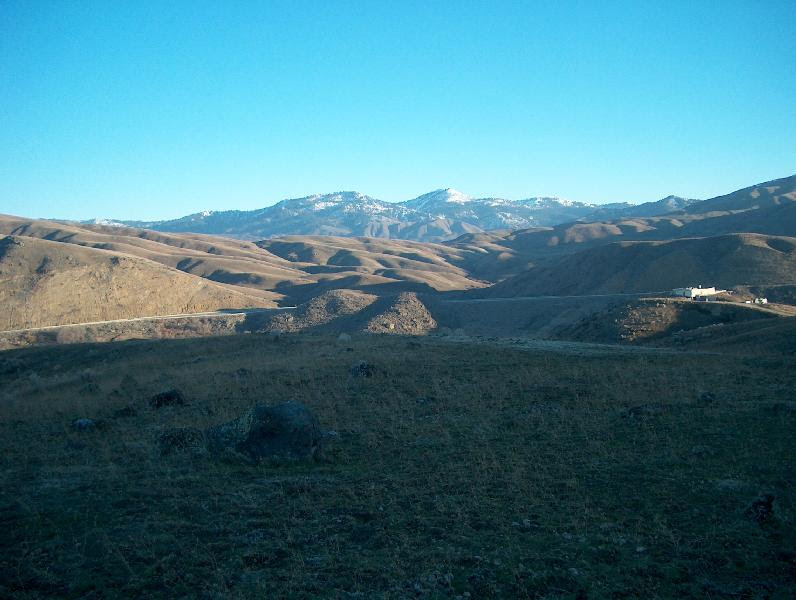 Posted by Clayton Cramer at 9:37 PM No comments:

If you know someone with a Losmandy GM-8 telescope mount, you might want to tell them about this little gadget that I have started manufacturing in my garage. The GM-8 mount is an excellent equatorial mount for telescopes up to about 30 pounds--nicely machined, and amazingly enough, still made in the United States (at least, until California decides to seceed from Jesusland).

The only "problem" (in quotes because it isn't really a deficiency, but a missing feature) with the GM-8 mount is that it doesn't come with wheels, so if you want to set up your telescope, you either need to be strong enough to pick up the mount, the tripod, and the telescope (typically about 70 pounds total), or you need to take the telescope off the mount, disconnect the cables, take out the three screws holding the mount to the tripod, then carry each of these parts out to where you are planning to set up. This is typically a 5-10 minute process--perhaps more at the end of your observing session, when it is now dark, cold, and you can't find one of the three screws that holds the mount to the tripod.

So my solution was to put wheels under it--which is a bit harder than it looks--at least, to do it elegantly. Unlike the competing product, which is general purpose, large, heavy, and costs $179.95, what I am making is specific to the GM-8, weighs less than two pounds, and has an introductory price of $40 plus shipping. There are many thousands (perhaps tens of thousands) of Losmandy GM-8 mounts in use, so I am hoping that this can turn into a small money maker. As my son-in-law observed over Thanksgiving, "Why, this could make tens of dollars!" Well, let's hope it's bit more than that.
Posted by Clayton Cramer at 10:35 PM No comments:

Email ThisBlogThis!Share to TwitterShare to FacebookShare to Pinterest
Labels: telescopes

It's concerning the announced merger of two major institutions:

Continuing the current trend of large-scale mergers and acquisitions, it was announced today at a press conference that Christmas and Hanukkah will merge. An industry source said that the deal had been in the works for about 1300 years. While details were not available at press time, it is believed that the overhead cost of having twelve days of Christmas and eight days of Hanukkah was becoming prohibitive for both sides. By combining forces, we're told, the world will be able to enjoy consistently high-quality service during the Fifteen Days of Chrismukah, as the new holiday is being called.

Massive layoffs are expected, with lords a-leaping and maids a-milking being the hardest hit. As part of the conditions of the agreement, the letters on the dreydl, currently in Hebrew, will be replaced by Latin, thus becoming unintelligible to a wider audience.

Also, instead of translating to "A great miracle happened there," the message on the dreydl will be the more generic "Miraculous stuff happens." In exchange, it is believed that Jews will be allowed to use Santa Claus and his vast merchandising resources for buying and delivering their gifts.

There's more.
Posted by Clayton Cramer at 9:48 PM No comments:

Email ThisBlogThis!Share to TwitterShare to FacebookShare to Pinterest
Labels: humor

Got To Do This Some Day

Mount Wilson Observatory's 60 inch reflector is available to rent: $450 for half night, and $900 for the full night. The focal length is 24380 mm--so even with a 25mm eyepiece, that's 975x. I would be amused to find out if the viewing conditions will tolerate that. I've read an account by someone who used the 60 inch reflector at 600x power on Saturn and the Moon back in the 1950s. Hmmm. Max group size is 25.

Let's see, if about 10 of us could pick a night, that would be $45 a piece for a half-evening. Of course, coordinating a time might be a struggle.
Posted by Clayton Cramer at 1:57 PM No comments: